I received word that Paul Ryan passed away at the office today, and I spent the rest of the work day in a daze. I couldn't process it. I thought I would have more time, that I'd get the chance to meet him at a convention, shake his hand and thank him for the hard work he put into the comics of my youth. It's strange to be so affected by the death of a man I never met, but in a very real way Ryan had a hand in shaping some of my favorite comics and thus had easily as much impact on my life as Christopher Reeve, Jim Henson, and Leonard Nimoy.

Erik Larsen once posited that there are certain characters that become yours as you grow from a kid who reads comics into a comicbook fan. Superman, Batman, Wonder Woman, Spider-Man, these are the giants. They're untouchable, and my relationship with Superman as a character is part of the bedrock of my psyche. But Superman belongs to the world, or at least so it seemed. Some characters you find and you feel like it's a discovery. Like it's something only you know about. You develop an affection for the character. He becomes 'yours' in a way that Superman, Batman, Wonder Woman and Spider-Man just can't. For me in my Marvel Comics heyday, that character was Quasar.

QUASAR was written by the late, great Mark Gruenwald, and he teamed with Paul Ryan in the wake of their excellent collaboration on the 12-part SQUADRON SUPREME series which I'll rave about given any opportunity. Ryan's work had a distinctive style that caught the eye. He wasn't showy or ostentatious, but he could deliver spectacle. He was especially suited for the more cosmic books like QUASAR, FANTASTIC FOUR, and SUPERMAN. He had a style and an attention to detail even in the most fantastic of scenarios that I can only call "pure comics." He never felt like he was phoning it in. He delivered on every issue and he made every character he drew feel alive.

Picking out a favorite issue is tough, but if I have to pick it's easily LEGENDS OF THE DC UNIVERSE CRISIS ON INFINITE EARTHS: THE UNTOLD STORY. Written by Marv Wolfman and drawn by Ryan, it's a missing chapter from the epic saga that brought down the curtain on the DC Multiverse (for a while, at least). Ryan's art manages to create a comparable sense of grandeur as George Perez's work on the original CRISIS. The creation of a completely distinct parallel Earth complete with it's own visually distinctive take on the classic  DC Comics' heroes couldn't have been easy either, but Ryan handled it with aplomb and made you feel real sympathy for the heroes of a doomed universe. It's damned impressive and if you can find it in the back issue bins at a convention I highly recommend it.

Ryan also illustrated FANTASTIC FIVE, one of my favorite titles to come out of the MC2 stable of comics: a futuristic take on the World's Greatest Comics Magazine that was at once familiar and fresh at the same time. One day I'll cover the MC2 universe (and it's most famous scion SPIDER-GIRL) later on down the line, but suffice to say FANTASTIC FIVE was my hands-down favorite. You could tell Ryan loved getting to release his inner King Kirby, and it showed in every panel on the book Again, if you can track this series down, do so. It's wonderful stuff. 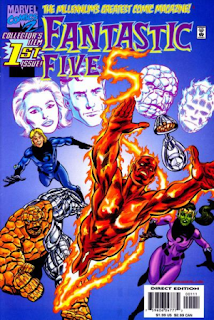 While the man himself is gone, the quality of his art will stand tall for years to come. I wish I could have met him in person so I could have thanked him for the wonderful body of work. Mr. Ryan, you will be deeply missed.

StacyHD
I'm Stacy Dooks, a writer living in Calgary, Alberta I'm a fan of all things popular culture, literary, and all points in between, and have pretty much committed large chunks of both The Official Handbook of the Marvel Universe and DC's Who's Who to memory. Whether or not that's entirely a good or bad thing I leave to the discerning reader. This blog is an experiment in creating a public forum for my discussions about comics, pop culture, and writing and what they mean to me. Thanks for stopping by!

The sites to see: